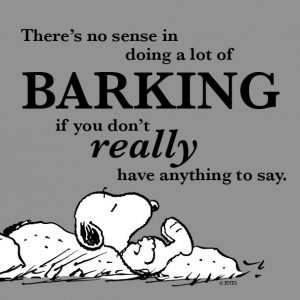 I have been furiously editing Jordan’s Sister over the summer while my test readers enjoyed the story. Each of them found different things that I hadn’t. Editing my own work is the most difficult task, but it is also the most rewarding. Finding a better, smoother way to say what I need to in order to convey the right meaning is satisfying. I’m proud of my work. Each day, I am a better writer than I was the day before.

It was different writing Jordan’s Sister than Caroline’s Lighthouse because I wasn’t pulling heavily from previous material. Caroline’s Lighthouse was a rewrite of a story I wrote at 15—the most polished of my teenage works. Jordan’s Sister was originally part one of a two-book series I wrote at 14 about the events leading up to a teen’s suicide in the first book and the events after in the second book.

I took the sisters Taylor and Jordan from those books and reinvented their characters with new backstories. I aged them approximately eight years to make it a New Adult novel (a novel focusing on characters age 18-25 who are finding themselves and/or love) and pulled only their names, a tiny backstory and one other character from the original books. Taylor’s now 22, and Jordan is 24. The rest of the original books, I saved for scraps. I never throw away anything I write because I might use some of the dialogue or story later for something else. 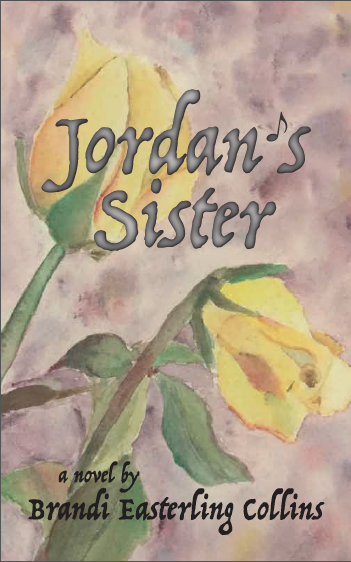 What’s it about, and what’s with the title? The sisters were child stars of a sitcom that ran for ten years. Jordan is still a famous actress. Taylor is an aspiring singer/songwriter hiding from her previous fame, stuck in her sister’s shadow. The title is Jordan’s Sister because it’s how Taylor feels about her identity as I begin her story. It’s not Jordan’s story; it’s Taylor’s story. Through her struggle to follow her heart, Taylor learns the meaning of true love, friendship, and family. She survives tragedies, ending up stronger than she ever thought possible.

Last night, I submitted sample chapters to two different small-press publishing companies. Both take un-agented work, and editors from each company requested that I submit material based on my tweet for #PitMad (a novel-pitch writing event on Twitter) which was the following: Can former child star, Taylor, find success in music and fall in love while living in her famous sister’s shadow? It took me half a day to condense the 83,500-word story into a two-page synopsis for one of the editors, all while having junior high book report flashbacks. It was harder to write the synopsis than it was to write the novel itself or the query letters!

I had a request from a different editor at a smaller event earlier in the summer, but I declined because the publishing company was e-book only. That’s not what I want for my novel. After I passed on the opportunity with that editor, I began preparation to pitch to a potential agent. Basically, it would be the agent’s job to seek out a publishing deal for me, and he or she would get a percentage of my profits. Seeking agent representation is something I might eventually do, but for now, I am placing that on hold while I wait to hear back from the small-press companies. I will certainly update everyone as soon as I can. It may take up to three months.

Now, I wait—but not idly.

Inspiration hit me during the editing process. I am anxious to start my next novel. In fact, I have started an outline and have some dialogue snippets and backstory formulated. I am not sure yet about the title. It will be Kincaid Walsh’s story of a summer she spends at her grandparents’ motel by the lake. I don’t know what she looks like yet, but my heart’s telling me she’s 14. She’ll experience a whirlwind of emotions and learn some valuable lessons about life, love, and death.

I’ll let you know more about Kincaid as I get to know her. Another secret about her: She’s all grown up now. Her story takes place in the mid-90s. Why? Because I need her to learn these lessons like I did, without a cell phone stuck in her hand. Without Facebook. Without Twitter. I will be pulling from a place of nostalgia. I think I might use my new painting for the cover art.

Where do I get my inspiration? It’s all around me. Everything I see, hear or read: music, poetry, art, novels, movies, the people I encounter. Nothing inspires me like music. A song can take me back in time and make me experience feelings stronger than any other art form. There are a lot of musical references in Jordan’s Sister because Taylor and her love interest, Layne, are both songwriters. They dance to Lifehouse’s “You and Me,” a song I played at my wedding 12 years ago. Here’s a link to the Spotify playlist I created that contains songs mentioned in the novel if you’re interested in listening to any of them. (Note: It does not violate copyright/trademark laws to mention song titles and artist names.)

On my anniversary, my husband and I got to see one of my favorite bands in concert. Lifehouse. I found out about their tour with Switchfoot back in April and sweet-talked my husband into taking me to a show near Dallas on September 4 at a brand-new venue. At the time, it was the closest show to where we live in Arkansas. I bought our tickets and reserved a hotel room. I was so excited, but my anxiety took over, and I worried that something would go wrong to prevent me from seeing them.

A few months later, a show was added in Springfield, Missouri for September 3, much closer to our home. We already had reservations in Dallas, so we decided to keep our original plans. The week before the concert, on a Wednesday, I found out that the construction for the venue in Dallas wasn’t completed and the concert would be moved to a smaller venue with standing-room only. I was so disappointed because I had really great reserved seats before. 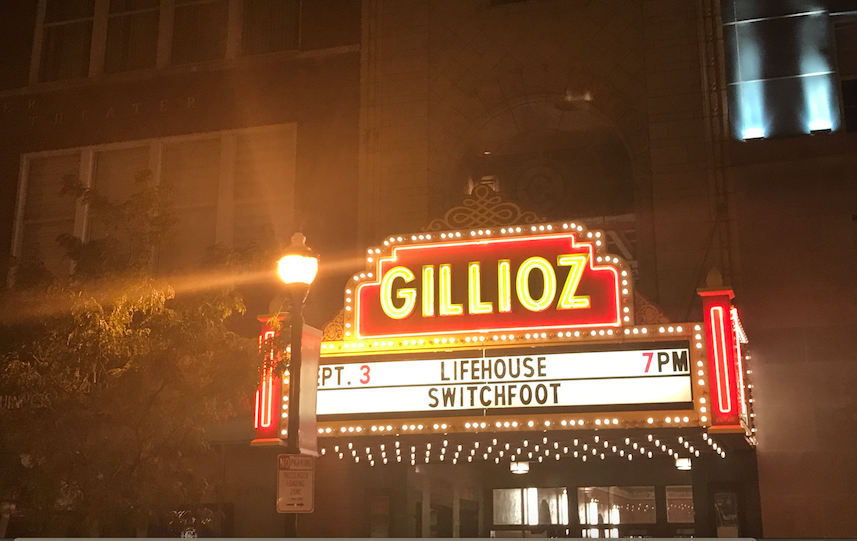 We cancelled our plans because neither of us wanted to stand up and get trampled on for four hours. I checked the Springfield show on a whim, expecting it to be sold out only four days before the show. Thanks to someone else’s cancellation, I was able to get front row seats. Seriously, about five feet away from the stage. By the next day, the show was sold out. I found a hotel about half a mile away from the Gillioz Theater where the concert was taking place. I prayed up until Lifehouse took the stage that nothing would go wrong because I needed that concert so badly. 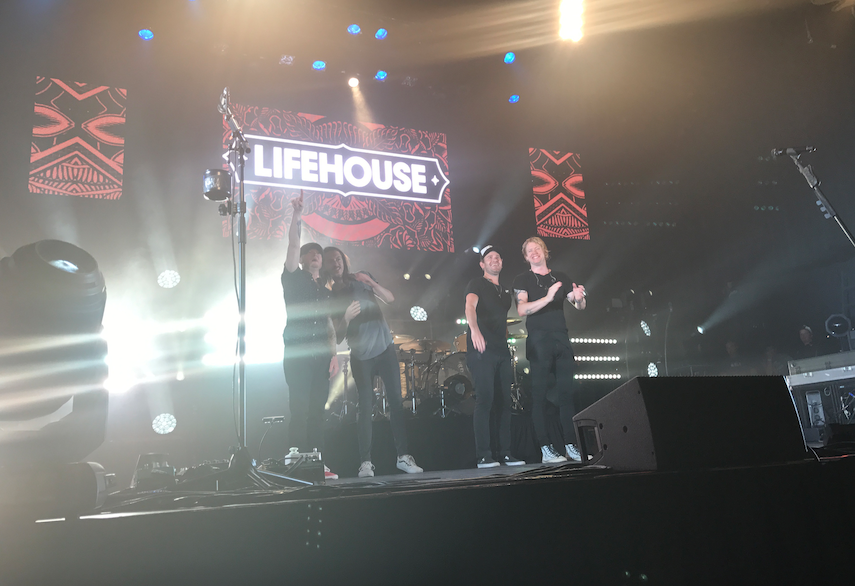 Lifehouse is one of only a few bands that I can listen to all of their songs and love every single one of them. Jason Wade is their lead singer and writes all their songs. The song that speaks to me most right now is their song, “Sick Cycle Carousel.” Getting to see it performed live was the highlight of the performance for me. (Click on the song title to see the video I took at the show.) The best thing about the whole experience? The man sitting beside me, holding my hand—my husband. The fact that he took me there even though concerts aren’t his thing all because it was my dream to go.

I’m more inspired than ever now. In Jason Wade’s words: “I never thought I’d end up here. I never thought I’d be standing where I am.” I feel the energy around me and inside me. I can visualize Jordan’s Sister getting published and imagine myself holding the novel in my hand in 2018. I want other people to read it and cry with Taylor when she hurts and to celebrate with her when she makes progress toward her dream.  I don’t know exactly how or with what publishing company, but I am confident that something positive will happen.

I still have so much to say. That’s my inspiration: wanting to share my art with the world. It’s a small glimpse into my heart and soul. Thank you for reading. 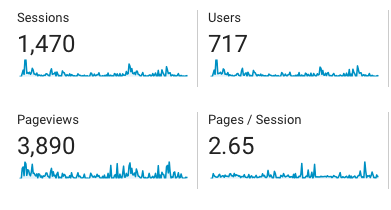 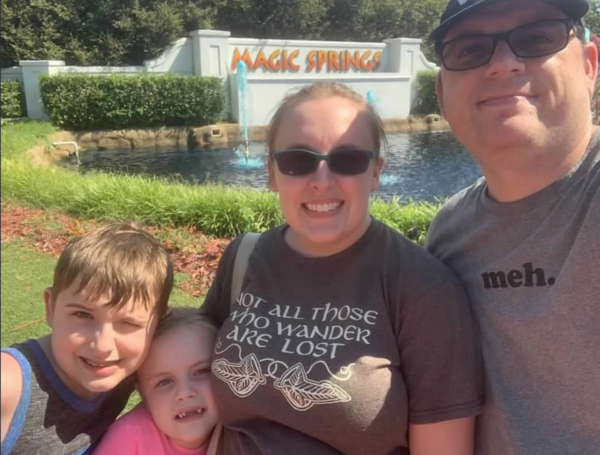 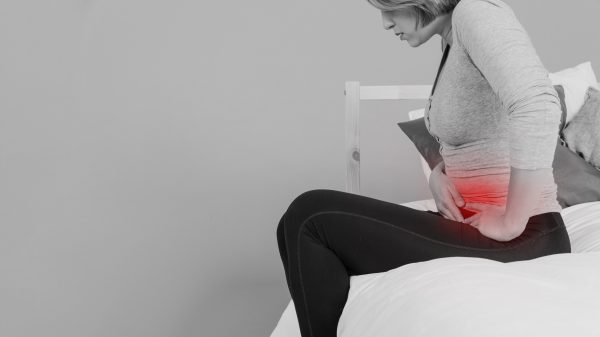