I fell in love with reading when I was a kid. I devoured books from the school library and used all my allowance money each month to purchase the next Baby-Sitters Club book in the series until I had almost the whole collection. Later, as a teen, I discovered the book section at our local Goodwill, a store I still frequent today. Back in the mid-90s, paperbacks there were 50 cents each (now they’re $1). Through my purchases at the Goodwill, I discovered Stephen King and V.C. Andrews novels (the ones she actually wrote before the “trust” pirated and diluted her memory—another story for another day) that I was probably too young to read at the time.

At the beginning of 2017, I set a goal on Goodreads to read 52 books or one per week. I wasn’t sure I would make it, because from 2008 (when my son, Drew, was born) up until the end of 2016, I averaged two to three books per year that didn’t have illustrations or animal characters in them. 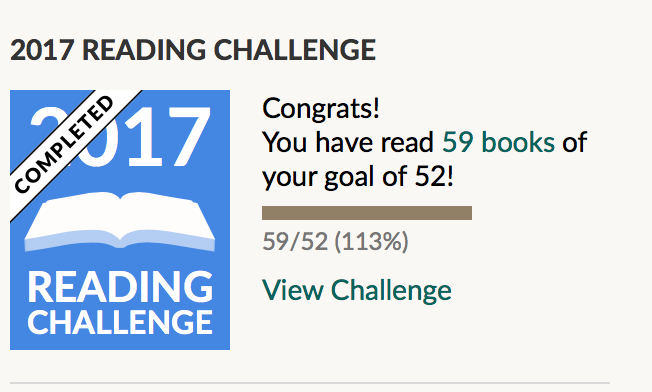 Well, I not only met but exceeded my goal. I read 59 books in 2017. Most of them, I enjoyed (three to four stars), and a few changed my life (five stars). I discovered some great indie authors and some traditionally published work that moved me in some way. I’m actually reading another indie author book right now (by someone I used to know) thanks to my Kindle Direct 30-day free trial. I’m not sure it’s a good idea to reveal what book it is, but I’ll think about it.