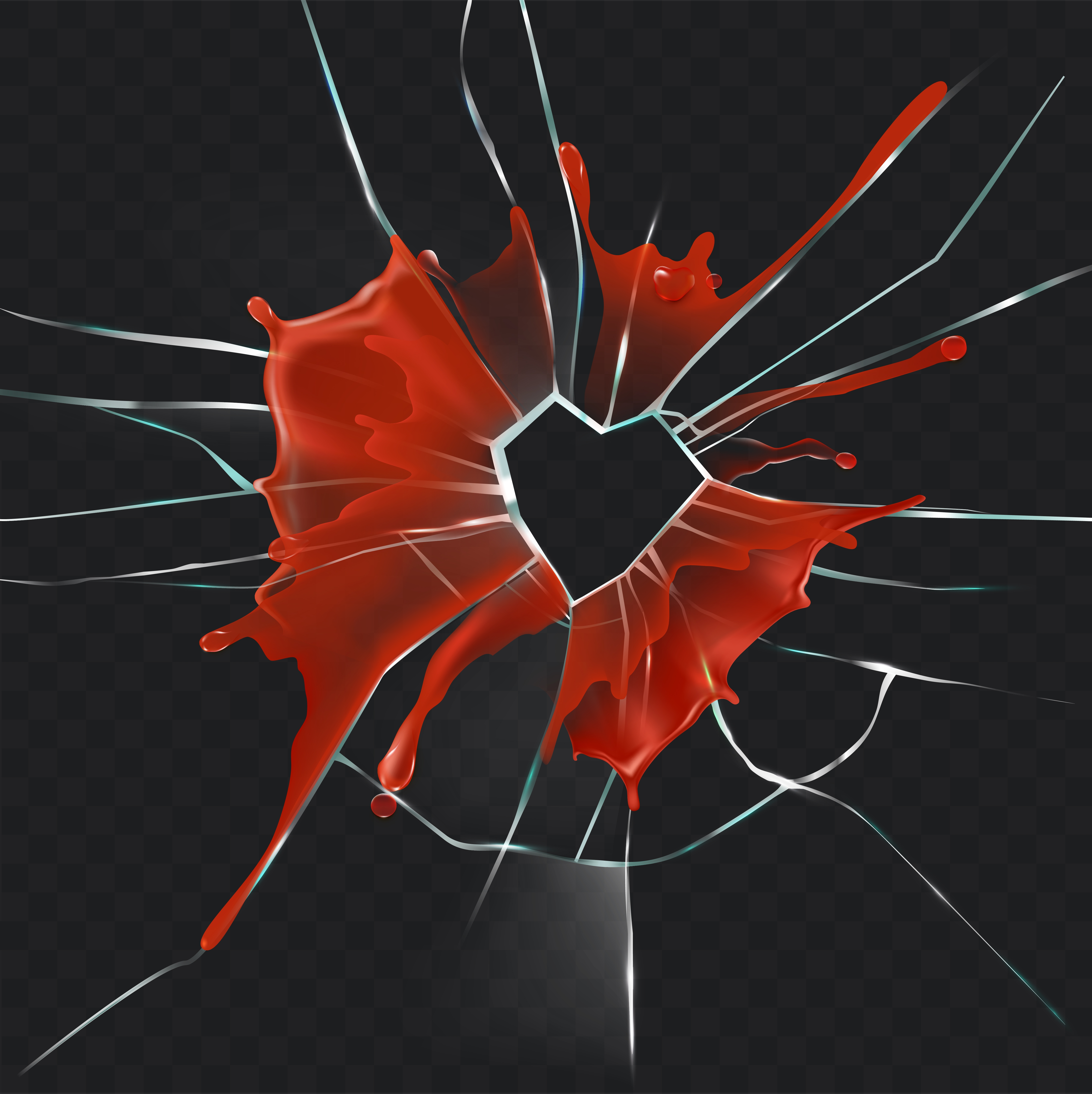 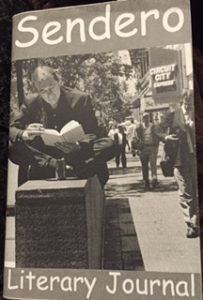 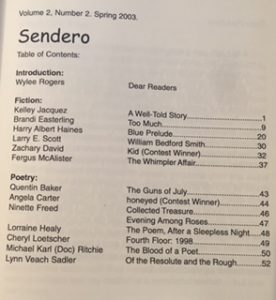 My first publication and also my first time writing from a male point of view. I wrote this short story when I was in college for a Fiction Workshop. I made a lot of revisions based on feedback from my classmates, who thought it was confusing at first.

I submitted my final draft (my third) for consideration in New Mexico Highland University’s student edited Sendero Literary Journal my last semester in college, which was spring 2003.

Her jeans are on the floor where she left them, one leg inside out. The dark red curtains are closed because she changed here yesterday. It’s better that the sun can’t shine in today. I don’t want to look at the light. The house is too quiet. All I hear is the dress bag on the closet door moving in time with the fan. The broom falls at my feet as I sit on our bed. Lanie had put it there. I don’t have to look. I know her sneakers are under the bed. At night she would take her shoes off beside the bed and I would push them underneath before morning. I couldn’t convince her that our new house was haunted. She was too intelligent, or might have seen me push them under the bed after I thought she was asleep. She looked so cute raking her shoes out with the broom handle.

I remember when we first met in college. I was a senior and Lanie was a freshman. She got a job in the wildlife department where I worked. I noticed her right away. She was adorable-long red hair, green eyes. She was dressed like a little girl in her jean short-alls and sneakers with her hair in a ponytail. She looked so small, her body, the features on her face. Her breasts were a nice size.

“Hi,” She said as she approached the front desk. “The people at the student services office told me to come here to work. I’m Lanie.”

“So I should probably be nice to you.”

“Where do I go?” she asked, slinging her backpack on to the desk.

“Follow me,” I said, and began a tour of the department.

Lanie was there for the same reason I was. She wanted to study animal habits, protect the environment and most of all protect endangered species. We began talking after the Wildlife Club meetings. I liked spending time with her, so I called her up Labor Day weekend with the number she had left on the club sign up sheet.

I had big plans to go to Scotland to study for a year so a relationship was the last thing I needed since I would be leaving so soon, but something about Lanie made me want to spend time with her. Other women I’d dated would never speak to me the way she did. I thought she and I could be friends, but things got serious. Before I could stop myself, I’d kissed her, held her, made love to her. I was in love with her. That meant missing her while away, thinking about her all the time. It was a bad time for that.

I tried to push her away but she didn’t budge. It is hard to end something you don’t want ended. I figured the sooner it ended; the easier it would be on both of us when I left. Watching my parents’ nasty divorce when I was ten had left me scared of anything that might become permanent. She almost made me cry in front of her the night I talked to her as we walked around campus. We had taken walks many times in the past six months.

“I’m not an idiot, Wes. I know what you said about not wanting us to get too attached, but I did. I am attached.”

“I wanted us to know each other.”

“Why? Why even waste your time with me?” she asked.

“But it’s what you said! I know you’re leaving in three months, but I don’t understand why we can’t be together until then. You know I’d wait for you. Why don’t you want that?”

I couldn’t answer. I couldn’t move. One sound would have made my eyes spill over.  Lanie stared at me and wiped the tears off her cheeks with the sleeve of her jean jacket.

“All those nights we walked around, talking for hours. They all meant nothing to you? I mean nothing to you? I don’t believe you. The way you looked at me, the way you’re looking at me now. You shouldn’t have acted like you love me if you don’t.”

She walked away, left me standing in the center of campus. If I had any sense at all at the time I would have went after her, but I didn’t. I thought it was better to break up long before I had to leave.  I missed her. She continued to e-mail me like she had while we dated. She told me about the little things that happened with the classes she was taking and sometimes told me that she missed me. I never wrote her back, but I read every letter. I didn’t want her to stop writing. Each time I got a letter I worried it would be the last. It was really hard to see her at the club meetings. I acted like I didn’t know her and felt like an ass the whole time. She looked as sad as I felt; I could see it in her eyes.

Lanie told me in a letter a few days before I left for Scotland that she was finished, did not want to be with me anymore. The next day she wrote that she didn’t mean it, but I had already called and asked to talk to her. She showed up at my dad’s house near the college while I was packing.  I said probably the stupidest thing I have ever said, I asked her to let me go, to give up on me.

“Wes, losing you is the only thing that really scares me. I obviously don’t know you as well as I thought, but I’m still not ready to give up on you. Maybe I will someday, but the way I feel now I don’t think it’ll be within my lifetime.”

I couldn’t say anything for a while after she said that. I just hugged her, told her goodbye, and asked her to leave. She wrote to me two or three times a month the first five months I was overseas. She wrote that she’d be a good person to come home to, always told me she loved me and would never leave me or hurt me on purpose. I wanted to write her back, but I never did. When she did stop writing I knew she was okay because I wrote to my friend Mike and asked about her. He was married to Lanie’s best friend, Beverly.  I missed her, but Mike assured me that she was working hard trying to stay busy. I asked all the time if she was seeing anyone. Mike always told me she wasn’t.

When I got back all I wanted was to be with her. It took awhile before she trusted me again. I couldn’t blame her. I would have hated me too if I were in her position. After three months of begging, she forgave me and we started seeing each other again. Things between us were better than they had been before. I was finally able to tell Lanie that I loved her. We had been back together for a year when I had finally saved enough money to buy her an engagement ring. We decided to get married right after her graduation on the fourth anniversary of the day we met.

The sound of the dress bag is too much for me, so I walk into our bathroom. The light from the window kills my eyes. She was here too. I smell her raspberry soap, and the candle she lit beside the bathtub. Her leopard print thongs are wadded beside the toilet, the matching bra draped over the shower rod. She never ceased to surprise me with what she wore underneath those ratty old jeans on her days off work.

When I left the night before last, she pushed my hair out of my face and kissed me between the eyebrows.

“Baby, I love you.” She said that every day.

We had lived in our new house for two weeks, but she didn’t want me with her the night before our wedding.

Back in the bedroom, I lie on our bed and watch the fan spin to a stop. The ceiling has sparkles that only show at night.

“It’ll be like sleeping under the stars,” Lanie had told me.

The entire house has sparkled ceilings. All the houses did when ours was built, according to the realtor, because a lot of carpenters at the time would mix glitter with the paint. Our boxes are still in the hallway. She was too busy with the wedding to want to unpack. I don’t have any clothes out to wear to the service tomorrow, but I don’t want to be here tomorrow anyway.

The morning of our wedding, everything seemed great. My parents were there, actually speaking to each other civilly. Lanie’s parents were laughing with them. The church was full of our friends. The wildflowers were perfect and all the candles were waiting to be lit. I was sick, couldn’t keep any food down.

“Shut up. She loves you. She would never stand you up. She practically stalked you when you two broke up and you were being an idiot. Trust me. Stay here, calm down and I’ll find out what’s going on.”

Mike came back about an hour later. I still didn’t feel better and didn’t realize so much time had passed.  He said that everyone had left and that Lanie’s parents and mine were on the way to the hospital. Then he told me about an accident, said we had to leave right away. Accident? What? Who?

The hour it took to get to the hospital felt like ten hours. Mike told me that Bev had called him from the hospital. A diesel truck had hit them on the way to the church, and Lanie’s side of the car was completely crushed. Beverly had scratches, bruises, and a broken arm. She didn’t know if Lanie was okay or not.

My parents and Lanie’s parents were in the waiting room when Mike and I got there. Lanie’s mom was crying. Her dad was pacing in front of the window. It must have been another hour before a doctor came out. He took off his cap, and then sighed.

“We did everything we could…”

Lanie’s mom began sobbing. I felt the floor as I slammed against it. Everything went black.

A box from the hallway falls at my feet. I didn’t realize I’d kicked it. It crashes against the closet door as I kick it again. Lanie’s fairy statues shatter on the floor in front of me. I throw them at the wall. I’m not supposed to cry. She cried a lot. I was stupid to have pushed her away, but she knew we were supposed to be together. I was afraid she didn’t really love me when we first broke up. Afraid I’d disappoint her if we got back together.

Tomorrow I have to tell everyone at the service how much I loved her. The same people who were here for the wedding have decided to stay. I have to live in this house, and work, and keep breathing when I don’t want to. It’s too much. She told me she’d never leave me. She lied.